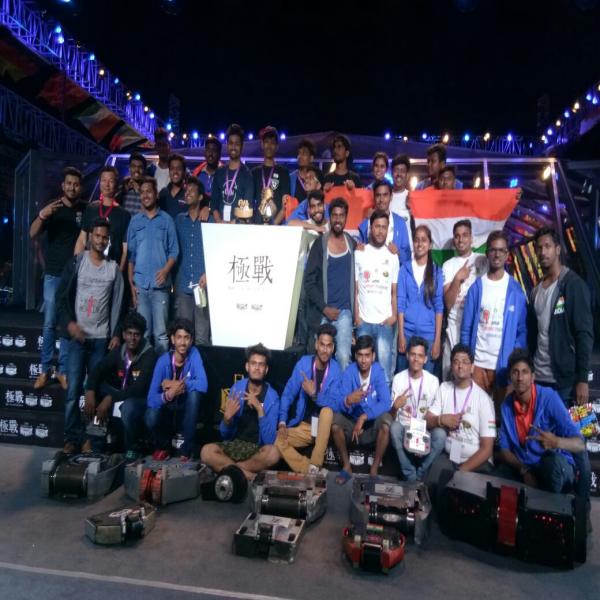 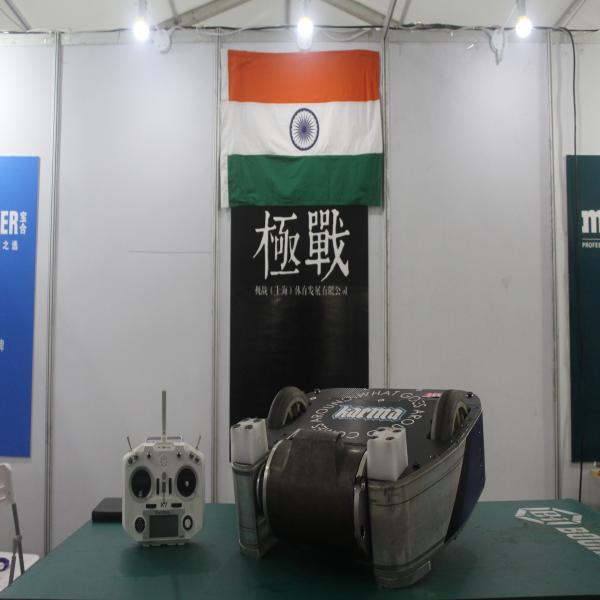 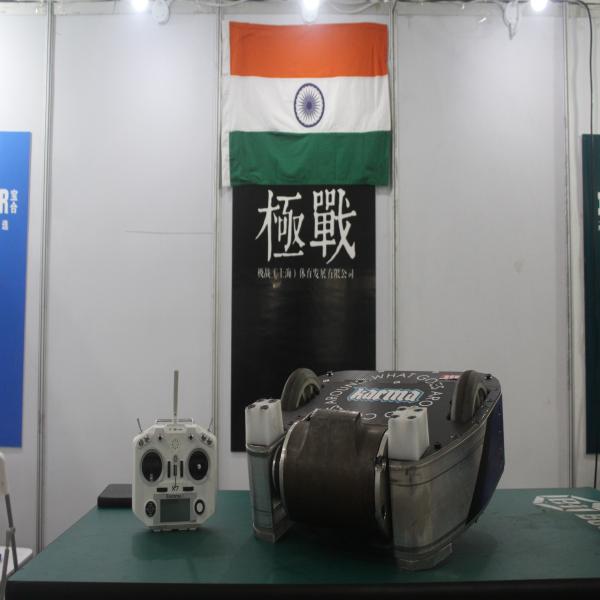 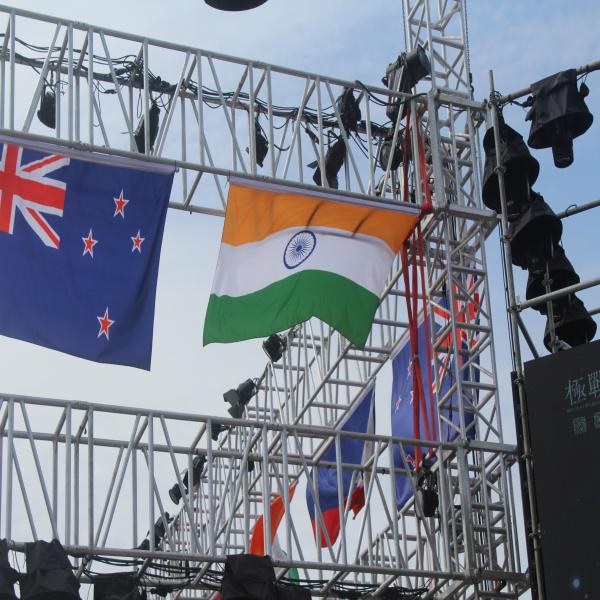 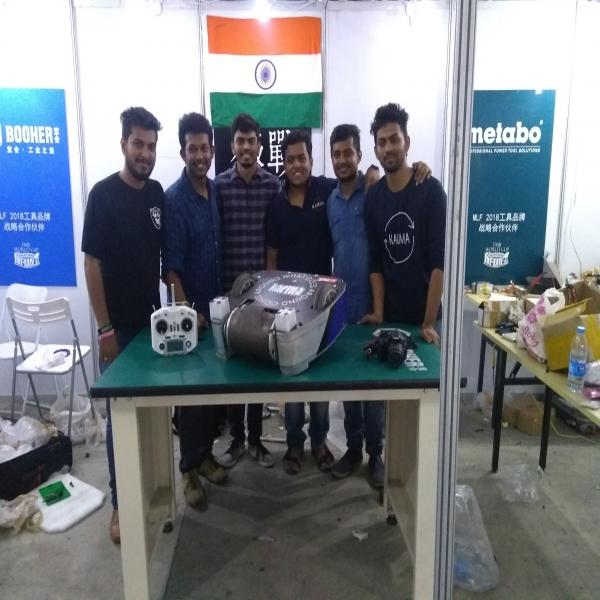 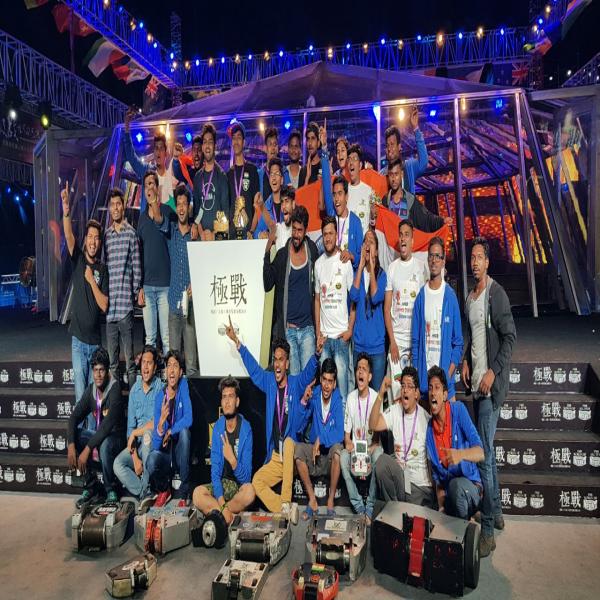 Team Karma is a combat robotics team under Sinhgad Technical Education Society that takes part in robotics competitions all over India. We have been participating in combat robotics competitions since 2015 with very positive results. Team Karma has 2 combat robots- one each in the 15kg and 60kg category. Robot competing under 60kg category is named ‘Karma’ and the one competing under 15kg is named ‘Moksha’. We are constantly ranked among the top robowars team in India. The team members are from SCOE and SKNCOE:

Robowars is a design competition where teams are required to design and construct a remote-controlled robot capable of fighting a one on one tournament. A team is declared winner if it can completely knock out the opponent under 3 minutes. The fight between the robots takes place in an arena enclosed by polycarbonate sheets from all 5 sides. High safety standards are required to be followed to organize any robowars event. The name ‘Robowars’ is commonly used to refer this robot fighting event in India. Around the world, this event is known by many different names like Battlebots, Combat Cup, Robogames.

Some top Robowars events all around the world are – Robogames held in USA, Battlebots – a televised robowars event in USA, FMB World Championship – televised event in China etc. About FMB

FMB is an organization that conducts International robowars events in China under the name FMB World Cup. In 2017, three such World Cup qualifiers took place. Top teams from all around the world are invited to compete at this event. This event boasts of an extremely well designed and safe arena. The matches in this event all live telecasted online and on the Chinese media channels as well. The top three winners from each qualifier are invited to compete at the FMB World Cup Finals.

The team has been achieving podium finishes consistently and is considered among the top robowars teams in India. Based on the dominating performances in these events, team Karma was invited to compete in an International Robowars event – FMB World Cup Qualifiers held in Jiaxing, China from 26th-29th October 2017 under the 60kg and 15kg categories. All the expenses of travel and accommodation were met by the event organizers.

The robot ‘Karma’ participating under the 60kg category defeated teams from Mexico, China and Brazil to win the FMB World Cup Qualifiers in October 2017. Doing so, Karma became the first Indian team to win an International event in this category. The team won a prize money of thirty thousand yuan(RMB) defeating former world champions from Brazil in the grand finale.

The top 3 winners from all the FMB World Cup Qualifiers were invited to participate in the Grand Finale in January in China. After winning the Qualifiers in October, Karma qualified to the FMB World Cup Finals and represented India in this event that took place in Sanya, China from January 25th-28th 2018. Top ranked teams from all over the world participated in this event. Participating teams were from India, China, Mexico, Netherlands, Brazil, Philippines, Russia, Italy, Germany, United Kingdom, USA etc. Few promising teams were also given wildcard entry to the Finals and two such teams were from India. So, a total of five Indian teams participated in the Finals.

Karma triumphed again in the FMB Finals and secured the first place in the 60kg category defeating top ranked teams from all over the world. The team won a prize of 60 thousand RMB from the event organizers.

In the semi-finals, we were matched to play against ‘team Riobotz’ from Brazil who are considered among the best and the most experienced teams in the world. Such is the experience of this team that they have published a book on building and perfecting combat robots. Defeating this team in the semi-finals gave us more joy than winning the finals.

Defeating top ranked teams is just part of the story. We had to face a major logistics crisis as one of our robots did not make it all the way to Sanya. Due to some error caused by the airport authorities in Honk Kong, one of our robots was lost in transit and was left in Hong Kong. After reaching Sanya, when soon realized our luggage was missing but we had no idea where it was. It could have been in Mumbai airport or Hong Kong airport or maybe even Sanya airport. This problem was amplified by the language gap we had with the Chinese speaking population. Overcoming this difficulty was a huge task. However, after some major help from our Chinese translator provided to us by FMB, we could convey our problem thoroughly and managed to find our luggage.

We finally received our robot from Hong Kong airport after 12 hours, but this meant we had very little time to work on our robot and assemble it. In fact, before our first match, we got so late to get our robots ready in time, that the FMB authorities had given us a last warning after which they would have to disqualify us from the competition. However, we managed to overcome this problem and got everything ready just minutes before our first match.

This event has been an amazing experience for us! All the hard work and the sleepless nights were worth it. It was a big learning curve for us and we hope we can continue to participate and win such prestigious events all over the world.