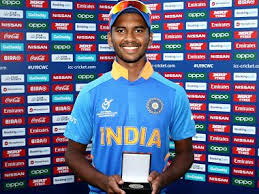 ICC U-19 World Cup 2020 – scintillating performance by Siddhesh Veer, Pune lad from Sinhgad Institutes – worthy Man of the Match winner.Pune lad, Siddhesh Veer from Sinhgad Institutes did the City and the Country proud with his scintillating performance at the opening group encounter of the ICC U-19 World Cup at Bloemfontein, South Africa. The 18-year-old performed impressively with both the bat and the ball, winning the match and winning hearts across the globe. Siddhesh Veer is an all-rounder. He was awarded ‘Man of the Match’ for his rapid fire, unbeaten 44 runs in 27 deliveries including 6 boundaries and a fantastic six shot right over the mid-wicket fielder’s head. Coming in to bat at number six in the 43rd over, Siddhesh displayed excellent cricketing skills with drives, straight drives, reverse sweeps and the most awesome boundary shot right over the wicket keeper’s head.

Siddhesh performed equally well with the ball, taking the prestigious wicket of well-set opener, Sri Lanka Captain Kamil Mishara and the wicket of all-rounder Amishi de Silva, bowling right arm off spin.Siddhesh Ashok Veer hails from Bhor a small town from Maharashtra State. He is pursuing Bachelor of Commerce from Sinhgad College of Arts & Commerce at Narhe Campus. An avid all round cricketer he has been representing the State of Maharashtra in Under 14, Under 16 and Under 19 consecutively since last 6 years. Expressing his gratitude to his Professors and the excellent sports facilities and learning atmosphere at Sinhgad Institutes, Siddhesh credits his success to his beloved father Ashok Veer, an advocate by profession who gave up his career to make a cricketer out of him, coaching him right from a tender age, taking him for practice and for matches regularly, motivating and inspiring him always. He also credits his Mother who is a school teacher by profession. Hailing from a humble background, Siddhesh Veer reflects grit, persistence determination, qualities that will always make him a Champ in the times ahead also.